Ever since marketers have indulged in content marketing, they have been weaving letters into words and words into paragraphs. Speaking in the current milieu of visual engagement, will generating long, SEO-perfect paragraphs suffice to entail audience’s attention? Not really!

The internet is an ecosystem for millions of articles and blogs. Catching your audience’s eyeballs in the sludge of words and paragraphs requires something that stimulates your visual senses. And that is exactly what visual content does.

Let’s get familiar with the most common forms of visual content marketing.

What would be a better way to demonstrate anything and everything under the sun other than a video? According to an estimate by Google 2015, there were more than 300 hours of video uploaded to YouTube in a minute!

A one minute video can do what a 10-page text material will fail to do. With a video, the theme and concept get elaborated in an easy to understand form. Whether you want to pitch a service or educate about a product, the concepts come out spectacularly in a video.

We did that with a video. Have a look

Creating a video requires resources and a great deal of time and energy. If that is the case, then why a video? Videos accounting for the entire web traffic will be 82% by 2022, up from 75% in 2017, as per a report by Cisco. Also, a landing page with a video has an 86% increase in chances of conversion.

Conveying your thoughts visually rather than in a mesh of words is nothing but intriguing. If anything that appeals to the visual sense after video, then it is images. While videos are best at conveying the message but there are quite a few drawbacks.

Creating a video requires plenty of resources and time. And not to mention, a video is expensive to create. In such cases, where businesses have resources and financial constraints, images are the next visuals you can rely upon.

Thanks to images, we can represent the idea in the above video without shelling out a ton of money. Have a look at below image.

There might be times when you need to explain a process, elucidate a procedure or a mechanism for which, of course, a video will be the best. But as stated, video requires resources and a plain image cannot do justice in case of explaining a concept. And you don’t want to plump for the monotonous text.

Go for illustrations. An illustration is a medium to communicate a concept visually. It does a perfect job of visually interacting with the audience along with explaining the concept without entailing boredom.

Do you want to include a lot of text and still make it engrossing? Infographics are the right way to do it. An infographic is a visual representation of information in an easy to understand format. Which gives you the liberty to include all your text along with data, numbers and visually appealing images.

Does not numbers at times overwhelm you and especially when the numerical list is endless? An article that provides insights into changing trends, sales, and marketing often include numbers.

How to incorporate them? Splattering numbers into the text is habitual but seldom gains attention. Instead, represent the numbers in graphical form. Data visualization can be best done with graphs and charts.

Meanwhile, given that digital buyers are tremendously increasing, your digital solutions should be unerring. Are you equipped with one?

Presentations, today, are not confined only to the boardroom. It’s again a visual representation of images, illustrations, graphs, and text. Because it is educative in nature, slideshows are the best way to visually upskill your audience on any topic. 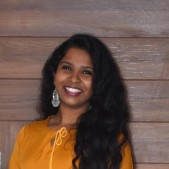 Love to mold my thoughts with a pen. My day is well spent with a team of digital junkies at Nuclay.